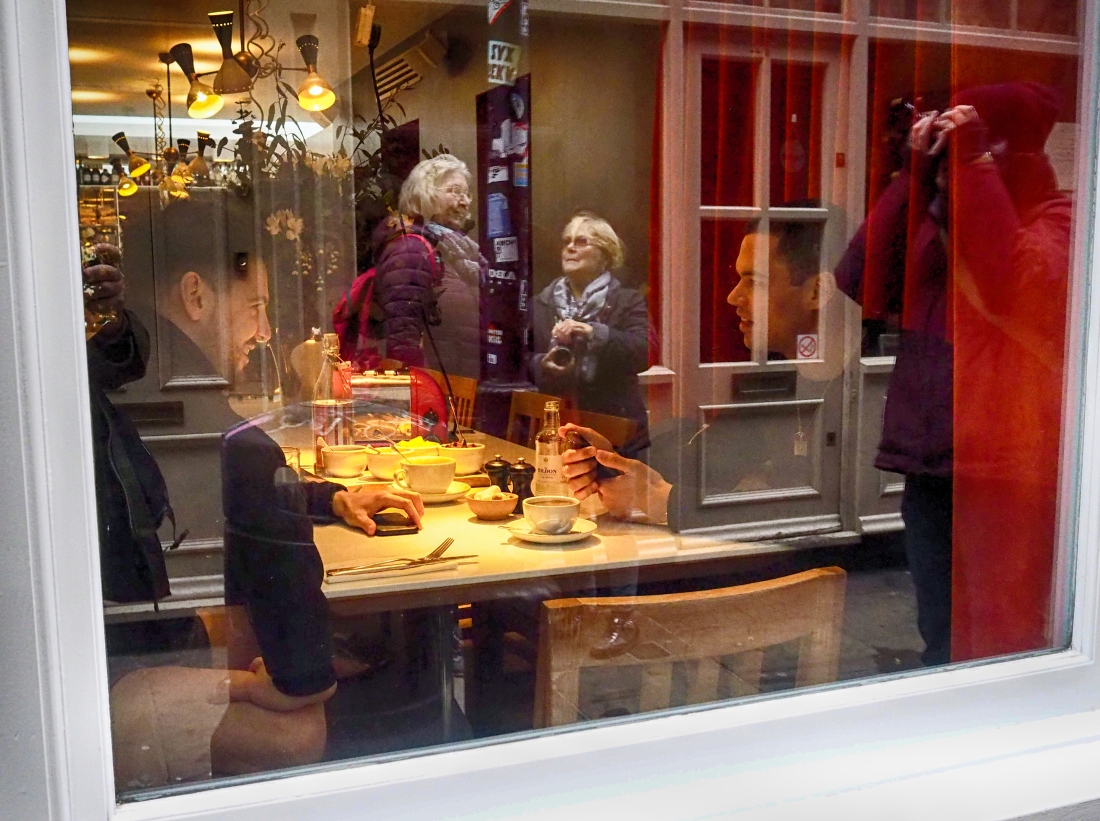 His main body of work was in black and white which was the norm in those days. He was a very humble character who never sought fame but carried out his career in fashion and journalism whilst later on, in the early sixties, doing a personal body of work in colour.

He experimented with using out-of-date film and even film that had been damaged by being stored at too high temperature. The idea being to see how it would alter the colour balance of the results. He never sought fame and it is only in recent years that his early colour work has been recognised for what it is.

My own experience in following the Street Photography genre has been to follow the early photographers like Henri cartier Bresson and Brassai and their ilke and using black and white.

Having seen Leiter’s work with colour though it’s got me to appreciate how the extra dimension of colour can be used to enhance the results. I particulary like Leiter’s photographs where he uses windows, often dripping with condensation, to frame his photos and enhance with reflections and colour to give a layered effect.

I’ve recently been doing a series called ‘Through a window’ trying emulate the style of Saul Leiter. Not always easy to get the condensation effect without being somewhere where it is very cold. However the layered effect can still be achieved with the glass of the window to give the reflections of inside/outside.

Most of my attempts at emulating this style have been using the digital camera which is handy when photographing late afternoon with the dying light. I did though try to get really retro and use colour film. Very difficult to do with only 200 asa film in dying light. It certainly makes you appreciate the skill Leiter used.

One of the problems is that I live in a small town so subject matter is a bit scarce. I’ll have to get myself into London late afternoon for a wander round.

Look out for part II as I’m going to persevere with this. I’ve even got some 400 asa film on the way and will try that with my SLR with its f1.4 prime lens.

Some years ago all you would see would be humorous or socio-political scribblings on walls of someone trying to make a point. In America it probably all started by being applied to the side of trains in the 1920s and 1930s.
Over a number of years however the original graphical scribblings on the walls have been transformed to a more colourful and artistic form.

Initially illegal with a constant battle going on between the artist and the authorities it has now in some cases been given the seal of approval. In some areas, walling been given for the artist to create their works of art on a more permanent basis.

These are some of my photos taken around Europe.

Getting close to home now with some wall art taken in Camden, London.

In more recent years too the work has moved from the public domain and has been seen more in galleries. I’m not sure if that is a good or bad move though. I leave the reader to form their own opinion.